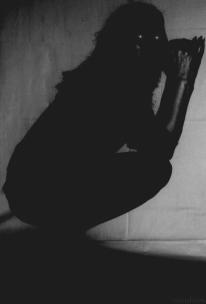 Little can be said about the personality of the Fallen, as few believe they even exist and fewer still desire to find out for sure. What can be garnered by stories, however, is a tireless drive to preserve the natural order of death—even if they wield the blade—lending new meaning to the term, “Death comes for us all.”

Fallen are said to be sexless, with elongated fingers, bodies more akin to a carapace of hard iron than flesh. Those few reported sightings say they are capable of loping on all fours like a beast.

Fallen are messengers of death, come to deliver those whose time has come. Every mention throughout history seems to corroborate this singular purpose. All that can be said for truth is this: if you wake and see a shadow flicker through the darkness . . . make peace, for your final moments are at hand.

Sky Harpies and Sables, Finch Farrows and Olewights, none produce the leaden, primal fear of the Fallen. Most believe them myth, but others, either mad or with longer memories, hold an unspoken terror of the Sonnet Wars. The sole surviving copy of Lowen’s Tomes had this to say on the subject: Approx. 1200 years ago, the Fallen surged from Vraith, nearly driving humanity extinct. Upon the shores of Vernadon, as the final remnants of all of Sora prepared for their last . . . the Fallen vanished, never to be seen again.